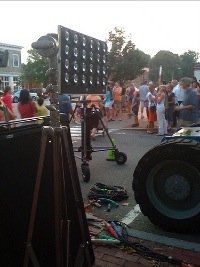 This evening when we went into Lexington to have dinner and go to the library we found many extra people milling around and massive bundles of cables running up and down the sidewalks.

It turns out they’re in the midst of filming some scenes for a new movie, The Fighter, starring Mark Wahlberg, Amy Adams and Christian Bale. Apparently our local movie theater, The Flick, has the right look for the period of the movie (circa ’92-’93), and there used to be a ‘Flick’ in Lowell where the movie is set. The bead store to the left of the theater has been changed for the movie, but the pharmacy and the barber shop have been there for decades and needed no makeup. The marquee has been changed to Belle Epoque, a movie that came out in ’92. 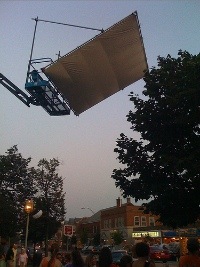 If you’re familiar with Lexington, it may look like those lights are facing the wrong way (away from the Flick). That’s because they have these giant reflecting panels suspended overhead. They had also put yellow signs with ‘GIX this’ and ‘GIX that’ along with an arrow all over town. We’ve seen similar signs in the past and wondered what the heck they were for. It turns out they’re to let the crew and others where to go to film a scene. They’re obscure so that the general public don’t all show up to harass the actors.
As we were leaving a line of cars that would be filmed showed up. When Tom was at the Clubhouse today he had heard there was a casting call out for pre-1993 cars with dents and scratches. The cars we saw were definitely ones with ‘character’.

The Minuteman had an article last week with a little more detail about the filming. You can see the rest of our pictures on Flickr.