Every car should probably have a fire extinguisher on board. That’s especially true for a home-built car. But the Westfield is pretty tiny, and finding room for the extinguisher has been a challenge.

I could probably have fit a 1 pounder in, but I wanted the extra safety margin of a 2 1/2 pound extinguisher. They’re pretty large. I probably could have fit it under the bonnet, but that would have made it hard to get to in a hurry. Some people mount them in front of the seats, but that space is pretty precious in this car. I couldn’t have done that on the driver’s side because I need to step in that spot to squeeze under the steering wheel. It might have been possible on the passenger’s side, but that would have been pretty unfriendly for people getting a ride.

So that didn’t leave me a lot of options. I ended up attaching it to one of the rollbar stays, like this: 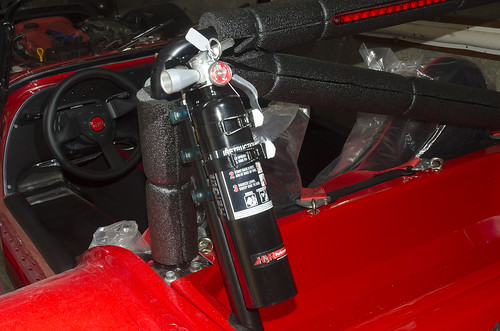 But even that wasn’t easy. The extinguisher I got (a nice H3R HG250) came with a quick release bracket. But that bracket is designed to attach to a flat surface. There are adapters to mount this size extinguisher to a rollbar, but most of those are designed for the heavier rollbars in a Jeep. So I made my own rollbar clamps. They look like this: 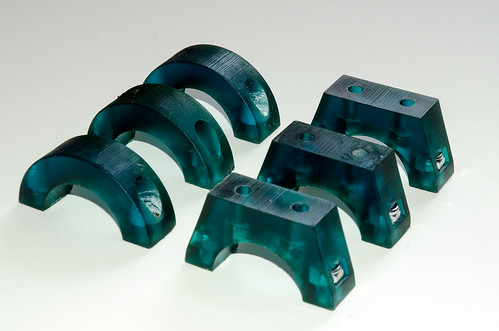 I printed them in the new Tough resin we announced the other day. That’s because you really don’t want this bracket to crack in an accident. If it did, the extinguisher would fly forward and hit the driver. This new Tough resin doesn’t crack. If it gets over-stressed, it deforms, but it doesn’t crack. And when it deforms, it absorbs a lot of energy. So it’s perfect for this job. And it looks nice too!

These rollbar clamps connect up to the quick release bracket that came with the extinguisher with a couple of M6 cap bolts. These go into nyloc nuts I embedded in the clamps. 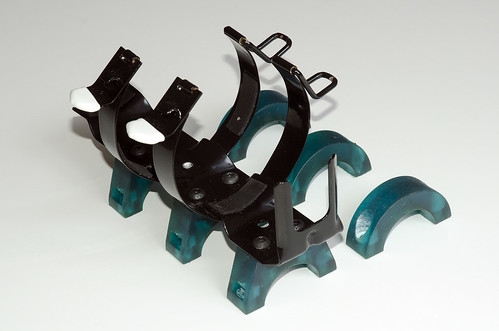