Today was Scratch Day, a worldwide network of gatherings where people meet up and celebrate and learn about Scratch. 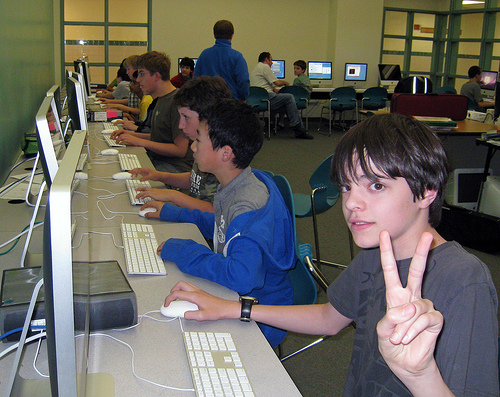 We had our own Scratch Club Open House at Clarke yesterday, where the Scratch Club members showed their projects to friends and family. Then today Peter and I went to the Media Lab for the Scratch Party at MIT. Peter was a great helper with the Scratch beginners. and the Scratch PicoBoard. Señor Angry Froggo here was in development. When he was finished his character on screen opened and closed his mouth in sync with the real puppet. Others enjoyed demoing their projects on the big screen. There’s a distance sensor underneath the mini trampoline that controls the project. But in many ways the best part of Scratch Day is getting together with others who share your interests. You can find more pictures from the Open House and Scratch Party at Flickr.