There are a lot of interesting board games where you place tiles which have path segments connecting the sides. As you place these tiles against each other, they form large twisty paths which your pieces can move on. For example, in Tongiaki, a tile has six sides and might look something like this: 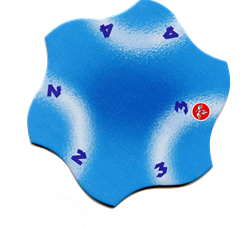 When you place several of these together, the paths line up like this: 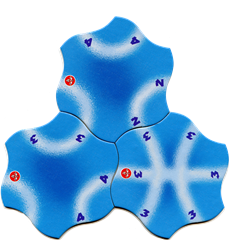 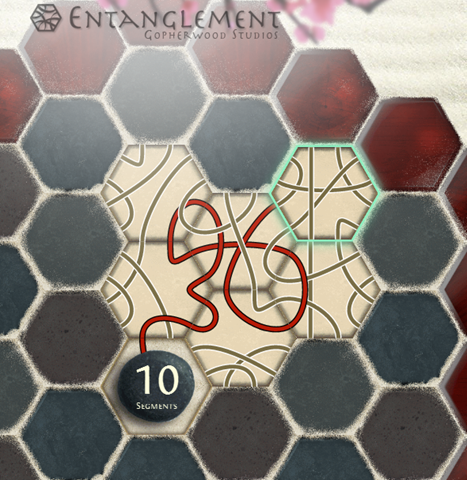 I was looking at these games and wondering about how many different variations there are. Well, the first thing that we can figure out is that the most interesting tile shapes are regular triangles, squares, and hexagons. You could use regular pentagons, but then your playing surface would have to be a dodecahedron instead of a plane.

Next we want to figure out how many different tiles there are for each variation. One simple way is to turn the tile into a sequence and then count permutations. If we go around the outside of the tile and give each path ending a unique integer then we can code a square tile like this: (1,2),(3,4). This means that there’s an edge which goes from crossing 1 to crossing 2, and another edge which goes from crossing 3 to crossing 4. That might look something like this: 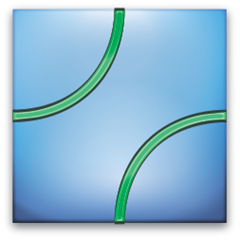 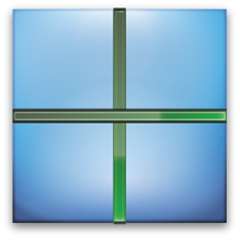 We can leave out the parenthesis and use the sequences 1234 and 1324 as these tiles’ codes. Now we can generate all of the permutations of the sequence and count them. For a sequence with 4 elements, the number of permutations is 24. That’s actually very high though because some of those permutations refer to the same tile. For example, the code (1,2),(3,4) and (3,4),(1,2) are really the same tile. In addition, if we don’t care about the direction of the path segments, then the codes (1,2),(3,4) and (2,1),(4,3) are the same tile. If we eliminate all of these duplicates, then we’re left with just 3 different tiles. Let’s take a look at them. 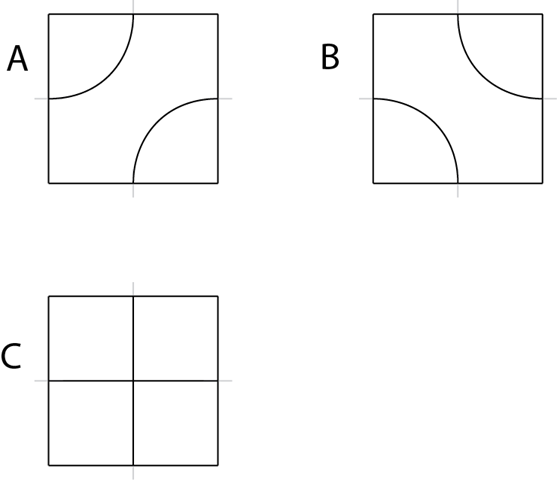 That covers sequences with 4 elements, what happens when we get to six, like those Tongiaki tiles? In this case, there are 720 different permutations, of which 15 are pairwise unique. Then we need to account for the rotations. But in this case there are two different answers at that step. Six path endings could be hexagonal tiles with one ending per side, or triangular tiles with two endings per side. In the first case, there are five unique tiles which look like this: 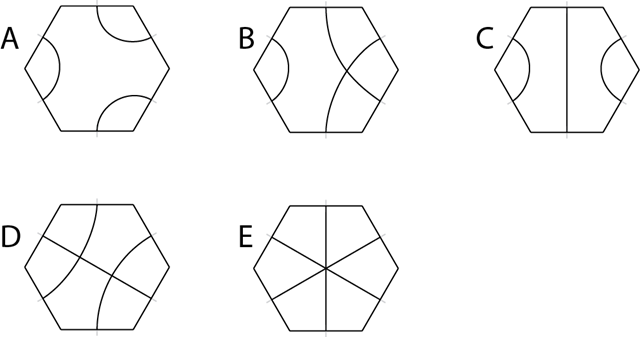 In the second case, there are seven unique tiles which look like this: 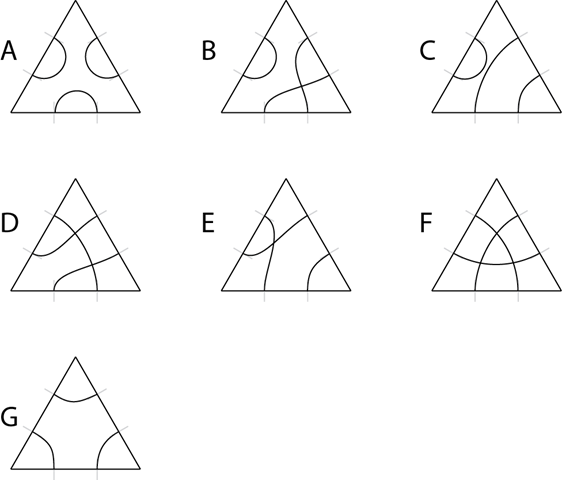 For tiles with eight path endings, there are 40,320 different permutations, of which 105 are unique. These are probably squares with two endings per side (like Tsuro) which means that there are 35 tiles: 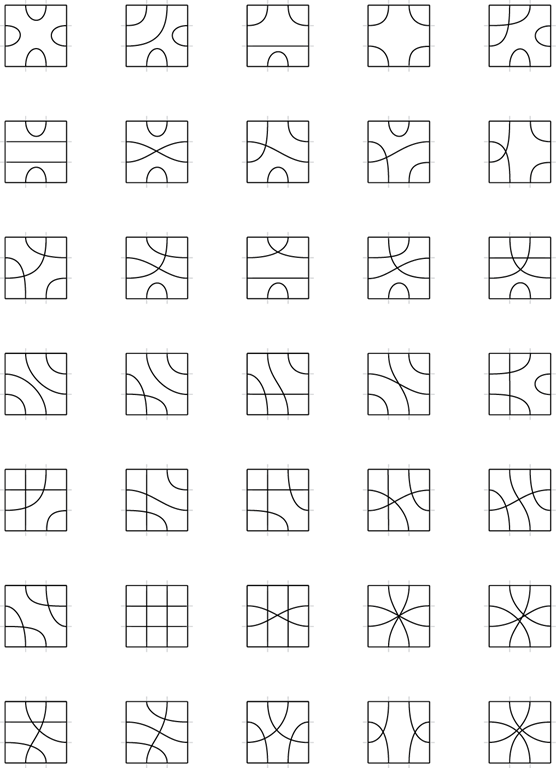 But it could also be octagonal tiles with one path ending per side. That yields these 18 tiles: 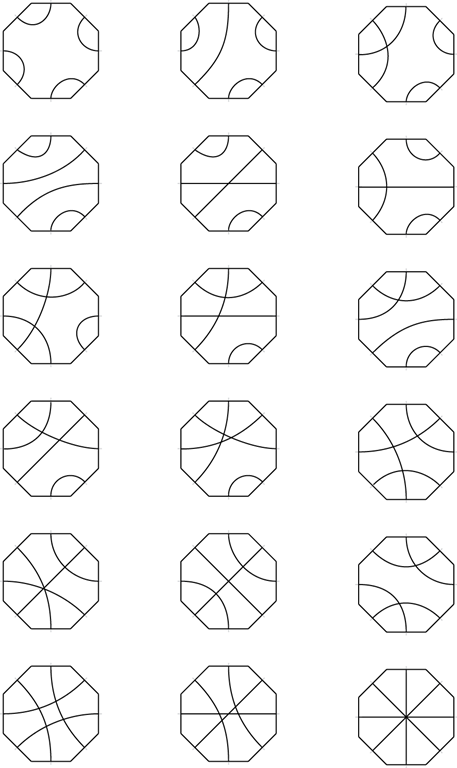 But how could we use octagonal tiles? They don’t tile the plane, do they? Well if you had a mix of octagonal tiles and square tiles, then you could alternate placing them and get something like this: 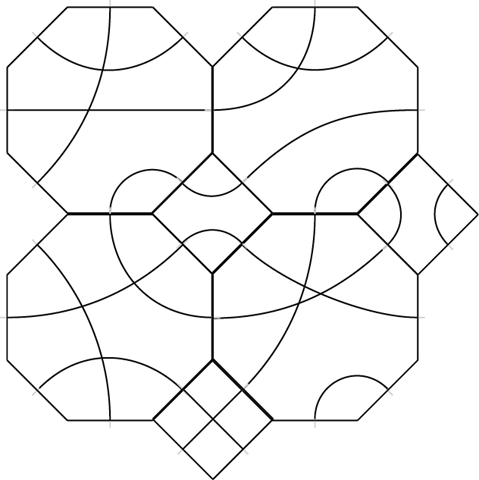 That might be kind of cool. You’d need multiple copies of each of the square tiles though.

There are a lot of other possible tile designs, but the numbers get big pretty quickly. I haven’t calculated the number of rotationally unique tiles for any of the really big tile sets, but but we know the other numbers for them because they’re sequences which are pretty common in math involving factorials. In the On-Line Encyclopedia of Integer Sequences (one of my favorite web sites), they’re sequences  A010050 and A001147. That gives us a table which looks like this (I’ve noted several of my favorites):

I’ll see if I can find some time to fill in the rest of that chart.