My day off in Cambridge

Today I was doing some extra credit for my AP Physics class.

The assignment was to take some friends and ride up and down a tall elevator on a bathroom scale. (And who says physics is boring/not cool?)

The experiment was to demonstrate how acceleration affects a scale reading, since scales don’t measure your weight directly, but rather they use something called the “Normal Force”. The Normal Force is the force that stops you from accelerating straight down through the chair you are undoubtedly sitting on right now. It is a force that acts in a direction perpendicular to the plane you are sitting on, so if you are on a level chair, it applies force straight up, countering gravity, keeping you in place so that you can read this wonderful post.

Back to the experiment. The reason the elevator makes a difference is the equation F=ma.

This is Newton’s second law and it means that Force applied = the mass of an object * the amount of acceleration it is experiencing. 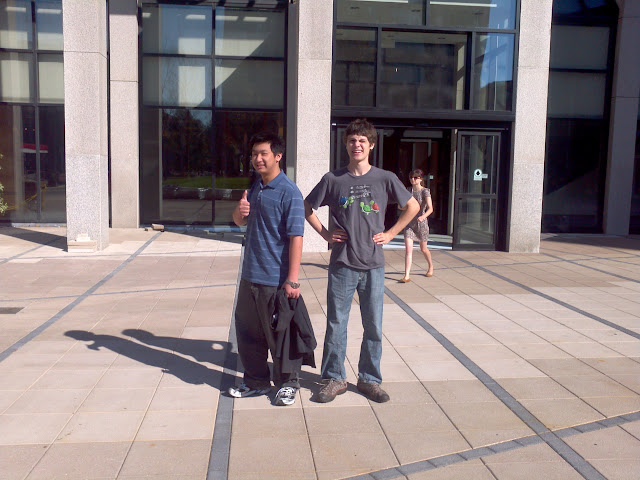 Bert and myself at the Marriott Hotel in Kendall square. Matt (not pictured) is taking the photo.

Time to start at the beginning. This is a fairly longs story, so be warned.  We got dropped off around the “back” of MIT (if that’s what you would call it) near Lobby 13 for anyone who knows where that is. We then walked over to Building 54, which is a Very Tall Tower, to see if we could get in to use the elevator.

After that we just wandered for a while, eventually ending up at the student center. We walked around for while, and eventually ended up heading over to the Media Lab (there was a bunch of boring stuff that I just skipped over there, but you don’t care, because it was boring) where we tried to get our first set of data. We got fairly good results, even though the Media Lab’s 6 floor elevator was a little short of the recommended 8-10 floors. After getting some data there, we started wandering around again, and shortly ended up out front of the Marriott. We decided to try their elevator to see if we could get better results. As it turned out, the 26 floor elevators in the Marriott were pokey compared to the ones at the Media Lab.  We did receive some funny looks, with Bert on a bathroom scale, myself using an android tablet, and Matt writing down the numbers we told him. Not exactly the scene you might expect in an elevator. We got some especially funny looks at the Media Lab, where there was some kind of function party thing going on. We reached the sixth floor, and when the door opened, we found ourselves in front of a whole bunch of people, who looked VERY confused about why we had a tablet, notebook, and scale respectively, so I poked the button for the ground floor, and waited for the doors to close. That was a quite entertaining episode.

We decided to wander some more after the Marriott, and ended up back at the Student Center again. I decided I wanted some Anna’s, Bert joined me, and Matt had a doughnut. We eventually headed back to Kendall, and took the subway back to Alewife.

All in all, I think we were fairly successful.