Buzz Aldrin at the Pops

We went to the Pops last night. It was a special event that was part of the Giant Leaps symposium at MIT, which was in honor of the 40th anniversary of the Apollo 11 moon landing.

Buzz Aldrin narrated a special movie that had been produced as a background to Gustav Holst’s Planets. 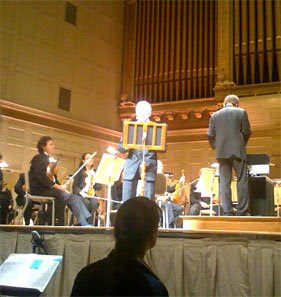 Our first surprise of the evening was where we were seated. I got these tickets at the last minute, so we expected to be seated in the back of the second balcony. Instead we managed to end up seated in the second row in the center, you couldn’t ask for any better than that. As we sat down I said to Mike, “I wonder if we’ll see anyone I know from Intermetrics?” Within 30 seconds we were joined at our tables by Intermetrics founders, Dan Lickly (along with his lovely wife) and Fred Martin. With a shock I realized we had somehow managed to be seated among all the folks that worked on Apollo, and to cap it off they happened to be people I knew from my time at Intermetrics. John Miller was there as well, sitting at a table on the other side of Buzz Aldrin who ended up sitting at the next table in the second half of the performance.

While watching Eye Turned Skyward, a short film documenting the lead up to landing on the moon, Mike whispered, “If you’d told the 10 year old me watching the moon landing that in 40 years you’ll be sitting next to Buzz Aldrin in Symphony Hall watching the Pops, I’d have said you’re crazy.”

We also ran into Mike’s old friends Bill Poduska and Dan Schwinn. All in all it was quite a night.