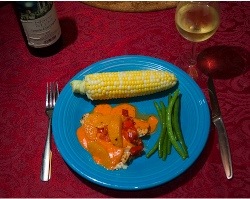 This is another recipe that sounded good from the Boston Globe Magazine article of a few weeks ago. We got another nice cod from the CSF today, so while the recipe suggested striped bass I decided to try it with cod. I really liked the sweetness of the oranges along with the roasted peppers.
Broiled Cod with Red Pepper and Orange vinaigrette
2 large oranges
1 cup roasted red peppers (we got fresh roasted peppers from Wilson Farms, but the ones in a jar would work fine too)
2 large or 3-4 small garlic cloves (I like lots of garlic, you can use less)
2 tsp fresh thyme
2 Tbsp cider vinegar
1/4 cup olive oil
Salt & freshly ground black pepper
1.5 lbs cod fillets
couple teaspoons of Northwoods seasoning from Penzeys

Finely grate a couple of teaspoons of zest from the oranges (the original recipe called for 4 teaspoons, but Tom thought the zest was too overpowering, so I would scale back next time). Add the zest to a food processor or blender along with half the peppers, thyme, vinegar, 3/4 tsp salt and pepper. Turn on the food processor to puree the ingredients and drop the garlic cloves in while running to chop them up. Stop and scrape down the sides at least once. Then, again while running, slowly pour in about a 1/4 cup of oil (I wasn’t really measuring, just went until it looked good). Set aside the sauce.

Segment the oranges (no skin or membranes) and put the segments into a bowl. Slice the remaining red peppers and add to the bowl with the oranges.

Turn on your broiler to high. Lightly oil a pan and set the fish on it skin side down. Sprinkle the fillets with Northwoods seasoning (or something else you like), and broil until cooked through (ours took 10 minutes). To serve drizzle some of the sauce over the fillet, top with some of the orange segments and peppers and serve immediately.

This made enough sauce that we’ll probably have it with the whiting we’ll be having tomorrow night as well.