I just finished reading The Architecture of Happiness by Alain de Botton. It’s an interesting exploration of what makes good architecture work, and why so much architecture doesn’t work.

The last chapter is really poignant. It’s about the process by which open land gets replaced by cheesy, cookie cutter, poorly designed houses. As he says:

A development which spoils ten square miles of countryside will be the work of a few people neither particularly sinful nor malevolent. They may be called Derek or Malcolm, Hubert or Shigera, they may love golf and animals, and yet, in a few weeks, they can put in motion plans which will substantially ruin a landscape for 300 years or more.

He says that we owe it to ourselves to insist that when a developer wipes out a field or woodlot, that they put in enough effort in the architecture to make the result more valuable than what was wiped out.

It isn’t clear to me how something like this is more valuable than the turkey habitat that preceded it. As de Botton says, the developer would answer with

… a familiar and apparently invincible argument that such houses have always sold rapidly and in great quantities.

He doesn’t think that argument cuts it. He thinks that we need to teach people that they should expect more out of the architecture that surrounds them.

As another philosopher once said: 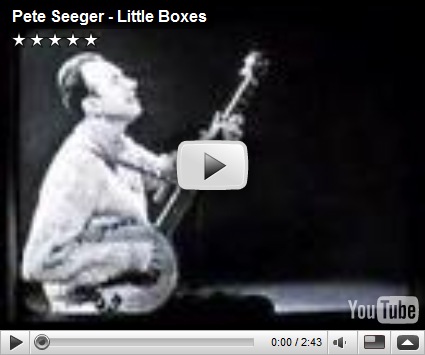 But actually, the boxes actually aren’t small these days. They’re really, really big. They still seem to be made of the same stuff though.