We were remiss not to mention Paul Newman in our posts about Lime Rock. You may know him as an actor, but he was also a race car driver. A serious driver too, not a dilettante.

Lime Rock was his home track. He was well loved there, and it seems to have been one of the places where he felt most at home. There’s a pretty good description of how he got started in racing in the recent book about him. He took it seriously, he worked hard at it, and he seemed to love the chance to stop being a star and just hang out with people who enjoyed doing what he enjoyed doing.

You might also enjoy this this film he narrated in 1968. You can watch it online on YouTube. You can find the first part here. The sound track feels pretty dated now, but he talks to quite a list of drivers. And if you get a chance, be sure to check out Winning, the movie that first got him hooked on racing. Last summer, just before he died, they gave him the track for the day. He was too weak to drive, but a friend took him around for a few last laps.

I’m sorry to say though, when we were talking about him at Lime Rock this year, one of our kids only knew him as the salad dressing guy. Oh well, sic transit gloria.

OK, one last item. Here he is taking Barbara Walters for a lap in 2007. 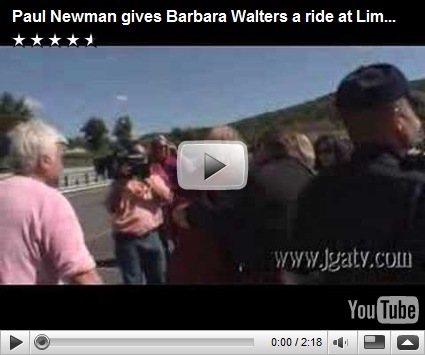