It’s been a good year for the Garritys. Tom is a sophomore in high school and Peter is in 7th grade. They both tower over me at this point, and I’m beginning to get used to being the shortest one in the family. It’s nice to be able to ask anyone in the family to help reach things on the high shelves. Mike is still at the MathWorks, and I am still working at the Media Lab. The Media Lab just moved into a new building on campus and I moved from an office in the basement to one on the 4th floor with a window – what a nice change. 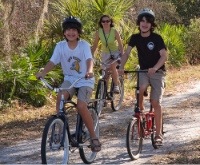 We went down to visit Mike’s parents in Florida in February. It’s always nice to get away from the cold New England Weather for a week. This year we visited the Myakka River State Park. In the park we went on the canopy walk, and we rented bikes too. The kids also enjoyed going tubing, and playing pool in the clubhouse with Grandpa.

Our major trip of the year was to Aruba. We rented a beautiful villa right on the water on Malmok Reef. We went snorkeling every morning. We also went wind surfing, scuba diving and explored caves on the windward side of the island.

This year was my 25th reunion at MIT. I saw a lot of people I hadn’t seen in years. It’s interesting to see how some people have changed and others look just the same. About the same time, we went to a Pops concert celebrating the 40th anniversary of the Apollo moon landing where we ran into several other old friends. Some of Mike’s old college friends also stopped by shortly after that. So it was a good year for catching up with old friends.

We managed to get out and do several interesting things around Boston this summer. We went to see the Tall ships when they were in town. The boys didn’t remember the last time the ships were here. We also went to the Micro Mini Car day at the Larz Anderson Museum. 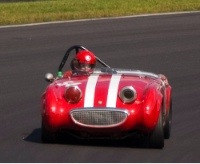 At the end of the summer we went to the vintage car races at Lime Rock. We met up there with Mike’s parents as they were on their way back to Florida after visiting folks in Vermont. It was a beautiful weekend with some unusual vintage cars, and many exciting races.

On the way to Lime Rock we went to Mass MoCA in North Adams to see the Sol LeWitt exhibit. We’d been intending to get out to Mass MoCA ever since it opened, and we were especially interested in this exhibit. Another noteworthy thing we did this summer was join a Community Supported Fishery. This is Gloucester’s version of a CSA. Every Wednesday we’d pick up about 5 pounds of fresh whole fish and have to figure out what to do with it. We learned lots of new fish recipes and ate well all summer.

Along the way we’ve had many interesting side projects including building things with Peter’s Arduino and programming in Scratch and Processing. We also went to a MakerFaire in Rhode Island, and both Tom and Peter went to Splash at MIT. Peter was very active in other ways too, raising tadpoles in the spring, and making videos in the fall. 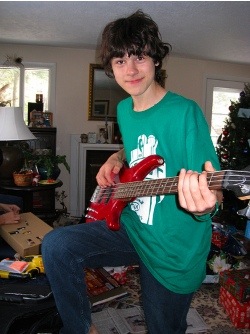 I got a bass at Christmas last year. It’s red. I’ve joined a band with a group of friends called The Caterwaulers, and that’s my primary instrument. I play trombone in the high school band, and when I’m not playing bass with the Caterwaulers I’m playing didgeridoo. The Caterwaulers’ first live performance was on Friday November 13th at the LHS GWAC band night. This however was not my first performance on bass. Over the summer I went to DayJAMS, a rock band day camp, where you get a week to write an original song. The first week was fun and our band was called The Whom.

The second week I was in a band called the Awkward Silence. We wrote a song that was 9 minutes long without being boring, and it was a legend at camp for the rest of the summer. 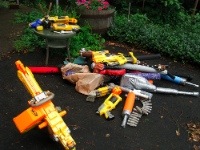 For my birthday party this year, I saved all of our cardboard from several months, and we built cardboard forts and armor in the back yard. Then we had a giant battle with foam swords and nerf guns. It was a lot of fun. 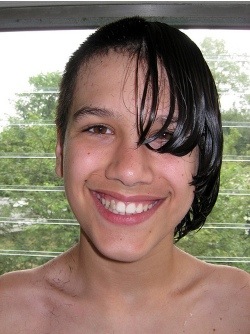 I had a pretty good year this year. I found school was a little easier in the beginning because I was able to find my classes. I had a lot of hair this year, until June. After my birthday, Mommy shaved most of it off. Halfway through we took a picture that you can see here. I liked having short hair in Aruba because I was not overheating. In February, we went to Florida again. This time was not quite as fun for me. It was not as fun for me because I had to have stitches done on my knee halfway through the week. I was riding on a folding bike at Grandma and Grandma’s, when it folded up under me. I got a big cut on my knee, so we rushed to the hospital emergency room to have it stitched up. While I was having my knee stitched up, Mommy let me use her iPhone to play Bejeweled and watch Tom & Jerry in order to take my mind off the big gaping wound in my leg.

I also got my braces off this year. I was very excited and happy that now I can eat sweet yummy crunchy sugary gummy food. Once I got back from school that day, mommy let me take a whole bag of popcorn and eat it all to myself. 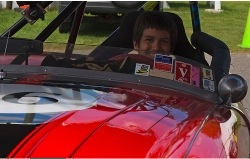 We also went to Lime Rock this year. It was very cool and exciting. Grandma and Grandpa also came with us. We met two people at the B&B we were staying at that worked on an Austin Healey that was in the races. The Austin Healey was very cool.

That’s all our news for this year. If you want to get our news all year long, you can follow our blog. For more information about how to use the blog, see these instructions. Let us know what you’ve been doing; you can always leave a comment here.