It’s that time of year again. The President has rolled out his budget proposal for 2011. That’s the beginning of a fairly drawn out process. In a couple of weeks the CBO will add their estimates and it all heads off to Congress. With luck, they pass the basic resolution in April and the various appropriations bills follow in June.  We’ll see how it goes this year.

The next couple of years are going to be pretty tricky. While the economy is in a liquidity trap and monetary policy has limited effect, you want federal spending to be relatively high. But as soon as the economy crosses into the plus side, you want to start working on reducing the deficit. And of course revenues are going to be low as the economy slowly recovers. It’s going to be a pretty tricky maneuver, especially because we racked up so much debt during the boom years. The current political climate is going to add plenty of degree of difficulty points too.

Speaking of the deficit, the Center on Budget and Policy Priorities has this nice chart of the contributors to the deficit over the next few years.

There’s been an awful lot of sound and fury recently about items that don’t look very large on that chart, hasn’t there?

One of the most interesting parts of the budgeting process is the forecasts of future income and expenditures. These numbers are critical to making the budget work, but they’re notoriously hard to get right. The New York Times had this interesting interactive chart today. 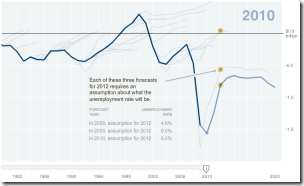 It shows the forecasts which were used during earlier budget processes and how they ended up comparing to reality. You can scroll through and watch how the sudden turns took the forecasters by surprise.

The Times also has a nice treemap view of the budget proposal.

A good, non-partisan resource for learning about the budget is The Concord Coalition. This is a group that was started years ago by Warren Rudman, Paul Tsongas, and Peter Peterson.

A more entertaining resource for learning about the federal budget is Jess Bachman’s Death & Taxes poster.