Last night we went to Jordan Hall (one of my favorite places) to see the Artemis quartet.

They played 3 Beethoven quartets. They started with one of the early ones (Opus 18 no. 2) which I don’t know well. They sounded really great on that one. They’ve got a nice, balanced sound and they play off each other very well. They have a really nice stage presence too. Three of them play standing, and the cellist sits on a raised platform so that he’s the same height. 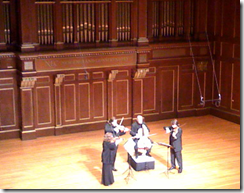 They finished with number 15 (Opus 132). I think that this is probably the greatest thing that anyone has ever written, and they did a fabulous job on it. Those last couple of Beethoven quartets (op. 127 – 135) are simply amazing. They really don’t sound much like his earlier work. They’re often compared to Brahms, but I’m not sure that’s really accurate. It seems like most of Beethoven’s work has the feeling that he’s trying to impress someone. These don’t have that feeling at all. They simply sound like he has something important he wants to say.

I don’t know why the A minor has always affected me so much. It’s built from themes he used in other pieces. The development has some interesting quirks, but it is a relatively classical form. But there’s something about it that makes it seem endlessly fascinating. T. S. Eliot said of it:

I find it quite inexhaustible to study. There is a sort of heavenly or at least more than human gaiety about some of his later things which one imagines might come to oneself as the fruit of reconciliation and relief after immense suffering; I should like to get something of that into verse before I die.

Before the concert, we went to dinner at Petit Robert. This is a small restaurant that’s run by the daughter of the guy who used to run Maison Robert. The food was wonderful. The only problem was that we didn’t have time (or room) to have dessert.