RoTMG stands for “Realm of The Mad God”, which is one specific MMO

Duping is a process within RoTMG that allows you to duplicate any item you already own. 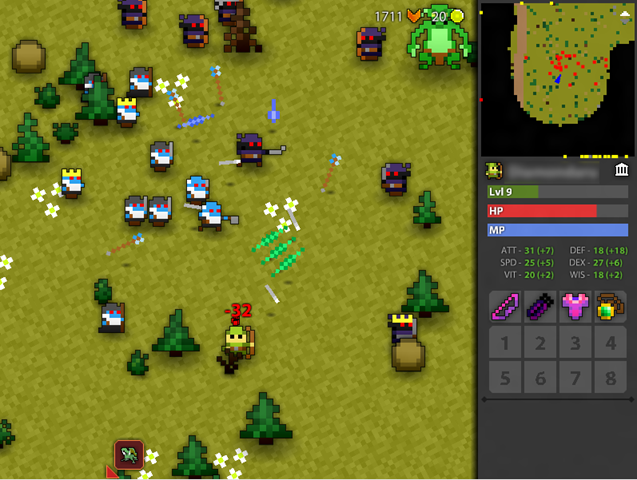 This is a screen cap of RoTMG. The green guy in the bottom center is the player everything else is trying their best to kill him.

So, we (myself and Peter) have been playing RoTMG for a while. We’ve been pretty casual about it and never really got too far. The most we ever really got was mid level items and characters. Point of clarification: This game features perma-death, whereby any character of yours that runs out of health dies, and is subsequently deleted, along with all of their gear. This will be very relevant later on.

This game has a functioning economy within it, as the highest tier items can be near impossible to acquire. To put things into perspective, the best drops can only be acquired by killing the most difficult boss in the game, who resides at the end of the most difficult dungeon, which can only be accessed by killing the second most difficult boss, while you have a “Wine Cellar Incantation” (Inc). Well, how do you get an Inc? It’s a drop from some bosses (extremely difficult ones, mind you. most people need a proper party of around a half dozen people to kill one of these) that has something like a 0.001% chance of dropping. You read that right. It drops off of approximately one in every 100000 bosses. This should give you some idea of how hard these things are to come by. Oh, and remember that hardest boss we talked about? He isn’t guaranteed to drop anything. As a result these items can be worth up to $50 or so. There are a couple items that can cost over $100, but those are very special cases.

So, now you know how hard it is to get one of these, consider this; if one of these people dies (which happens more often than you might think) they lose this item. So, demand is huge; everyone wants as many of these as they can get their hands on, but supply is tiny. There is one of these items for every several thousand players.

Now, a recent patch had a bug in it that allows “duping”, a process to create 2 copies of any item, with the ability to duplicate up to 8 items at once. Now, as you might imagine, it takes some of these items, and makes them thousands of times easier to come by, because if you can get just one, you can then multiply them. This means that these items have become “normal”. So the in-game economy has crashed. Hard. We don’t even talk to anyone that doesn’t have at least one of these items (we have dozens between the two of us) since they have nothing to offer us. 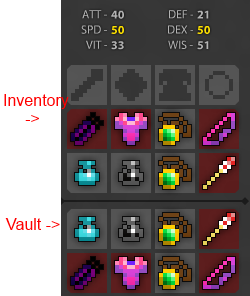 This is a screenshot of the results of a successful dupe.

Now, the game developers are obviously scrambling to fix this, since it is making the game less fun for anyone without these items, or anyone who doesn’t want to dupe. Oh and let’s not forget the other obvious reason: this bug must be causing the developers to lose money, right? Wrong. See, they don’t sell most of the items that lost their value. That’s all third parties. The things that WildShadow (the game devs) sell can’t be traded. But you would think that they wouldn’t be bought as often because someone who buys one would just duplicate it, right? Wrong again. One of the types of things you can buy from them with actual money is keys. These keys open portals to dungeons, where you can find all sorts of nice loot, which you can then – you guessed it – duplicate! So everyone, their pet hamster and their grandmother has started paying money to buy these keys. WildShadow will probably show that this period actually had increased profits, while the third party sites (like defpot.com) are losing a ton of business instead.