I recently got a Project Tango device. I hadn’t done much programming for it before I realized that it’d be really nice to have OpenCV library for programming it. Luckily there’s a port!

Last night I downloaded it and built it. There was a bit of thrashing as I figured out how to fix up the build.gradle files that AndroidStudio created when it imported it. I’m not very good with Gradle yet, but I’m staying in AndroidStudio so I learn it.

Anyways, I did get it built, and now I’m happily using it. For example, here’s a screenshot my variation of the Face Detection sample: 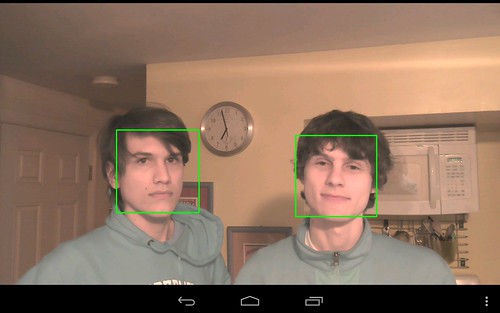 Of course that one’s a little silly because the device’s fisheye camera appears to have an even better face detection built in, but it’s a good one to start with. We also haven’t figured out what’s up with the color in that picture. Pete’s shirt is actually much darker than Tom’s, but this video feed seems to show them as being the same color in lots of different light. Perhaps the Tango’s camera doesn’t have much of an IR filter?

The next thing I want is a library for writing a decent scientific data format such as HDF or netCDF.