I finished off the area between the scuttle and the engine this weekend. It holds the pedal box, the battery, and the header tank for the cooling system. You can see the last two of those in this picture: 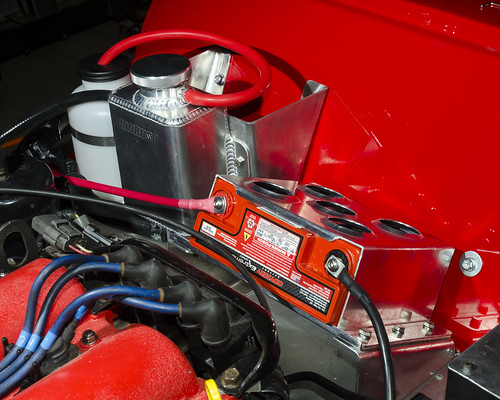 There was a lot of custom work involved. The pedal box just needed a bit of minor fettling, but the other two were a bit more involved.

The header tank is required because the nose is so low that the radiator is actually below the top of the engine. That means that if the header tank was on the radiator, there’d be problems with air bubbles in the engine’s cooling jacket. So there’s a hard line which goes all the way around the left side of the engine to connect this tank into the cooling system down near the water pump. And a soft line which I ran down the right side of the car (the black one in that picture) which collects any air bubbles and takes them up to the header tank. The kit came with a plastic tank off some Nissan. It really didn’t fit well, and I decided that I didn’t like it. So I found this aluminum tank from Moroso, and then added an overflow tank from a Triumph. Of course I had to fabricate that bracket that holds it to the scuttle.

Once that was in, I was ready to install the battery. I’ve got a nice little Odyssey PC680. I was going to just strap it down to the top of that shelf, but I realized that it was going to be hard to get to the terminals in there behind the engine. So I fabricated another aluminum bracket which holds it up at an angle so it’s easier to access.

Those two pieces were quite a bit of work, but I think it turned out pretty well. Don’t you?