One piece of the Westfield kit that I didn’t like was the dash. It uses the instrument pod from Miata, and put it into a flimsy plastic molding. The result just didn’t look right, so I decided I would do the dash my own way. Naturally that turned into a “learning experience”. The original Lotus 7’s used an aluminum panel with a vinyl covering. That seemed like the right approach, but a simple flat panel was going to interfere with the shifter and the ignition switch. It needed something a bit more involved. After a bit of research, I decided to use a technique called hammer forming. Here’s how it went.

First I needed to make the form. I got four sheets of particle board and carefully marked out the shape I wanted. 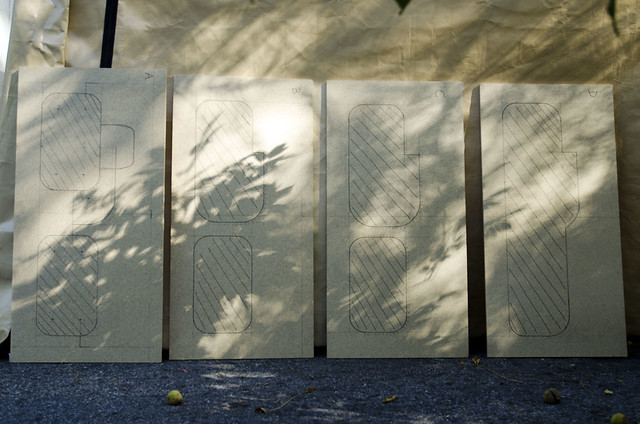 After cutting out all of the shapes, I used a router to round over the edges. Then I stacked up three of the sheets and glued them together. Once that was dry, I did several cycles of sanding and Bondo to make everything nice and smooth. 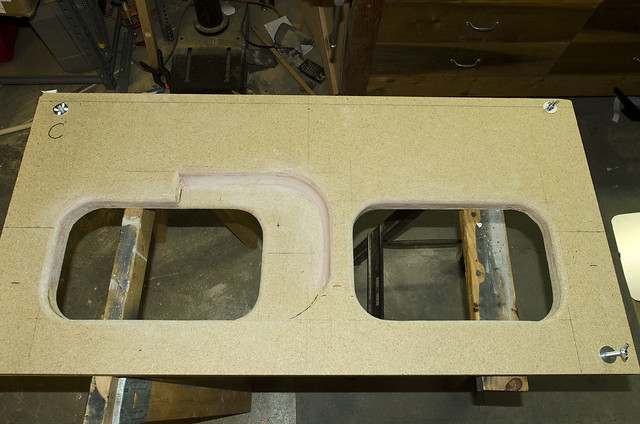 The next step, of course, is the sheet of aluminum. I used .063″ 5052 sheet which I got from one of my favorite stores: Metal Supermarkets. I used 5052 because it is quite corrosion resistant, but still easy to work. Well, it would be easy to work if it hadn’t been hardened. So after I cut it out, I had to anneal it. Annealing aluminum is a bit tricky because you need to get it to a temperature which is rather close to the melting point. I used the “sharpy trick”. The way that works is that you scribble all over the area you’re going to work with a Sharpy brand marker. Then you heat it with MAP gas until the marker disappears. That’s hot enough!

Next you lay the piece of metal on the form. The waviness in this picture is a result of the annealing. 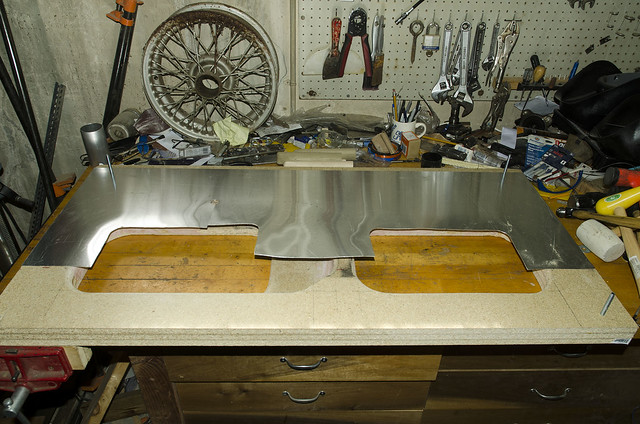 Then the fourth piece of particle board went over the top, and I clamped everything tight. I actually had a lot more clamps than this before I was finished. You don’t want anything moving while you’re working the metal. 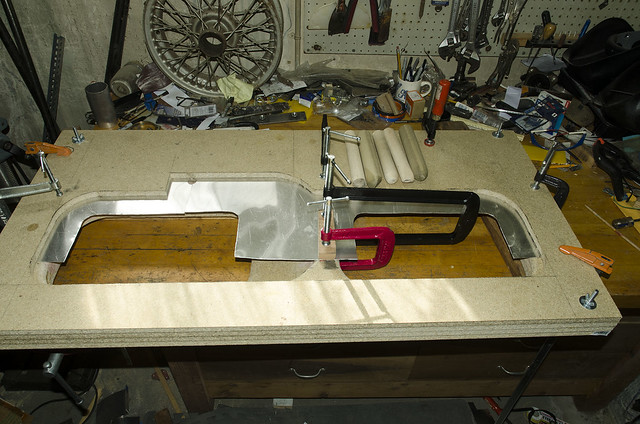 Like all the best learning experiences, I needed some tools. Here’s what I used: 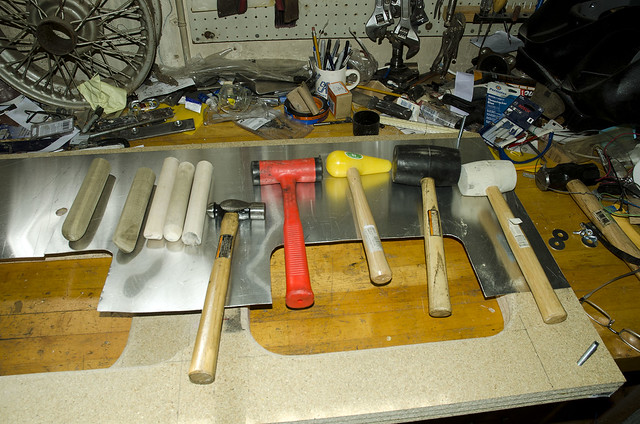 Lots of hammers, of course. Mostly soft headed ones, because aluminum is very soft and marks easily. The one with the yellow head is called a bossing mallet. It was extremely useful. The things on the left are called “corking tools”. I made them out of 1 1/2 inch dowels. They’re each flat on the back end, but they have different shapes on the front end. Some are pointy, some are round, some are convex, and some are concave.

Next I started hammering! 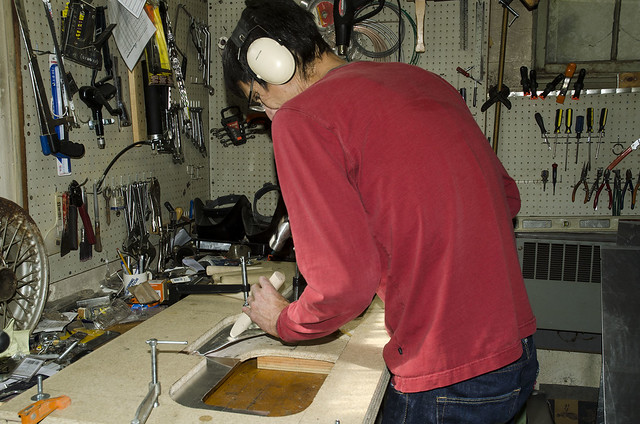 It’s a pretty slow process. You slowly work your way around the edge with lots of light taps. You don’t want to go too fast, or you’ll get a very rough surface. Here’s a closeup. 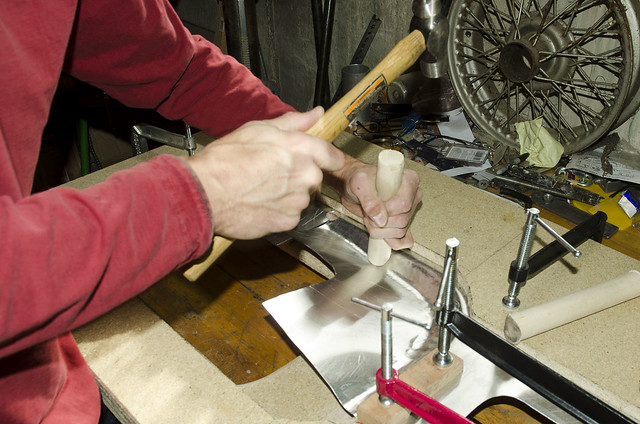 Stretching them metal into that pocket was a slow process, but it went pretty smoothly.

After I had the sheet metal pounded onto the form, I needed to fabricate a couple of brackets to mount the dash. The first was this simple one. 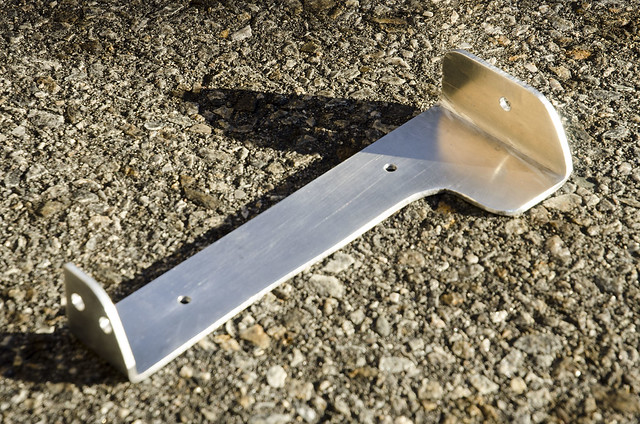 It goes on top of the transmission tunnel like this: 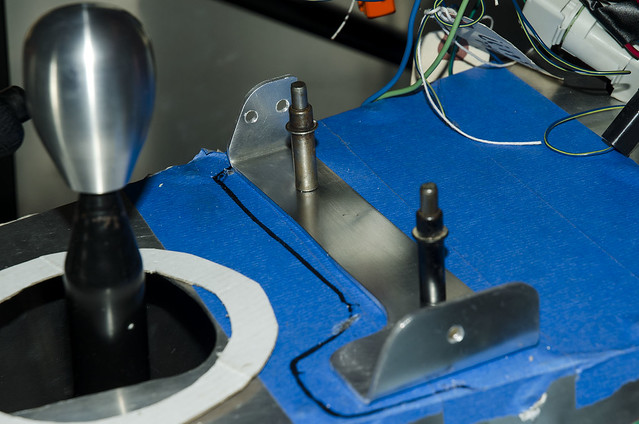 It’s just held by a couple of clecos for now, because there are some more parts that need to fit in this area, such as the data logger.

I also hammerformed this small bracket: 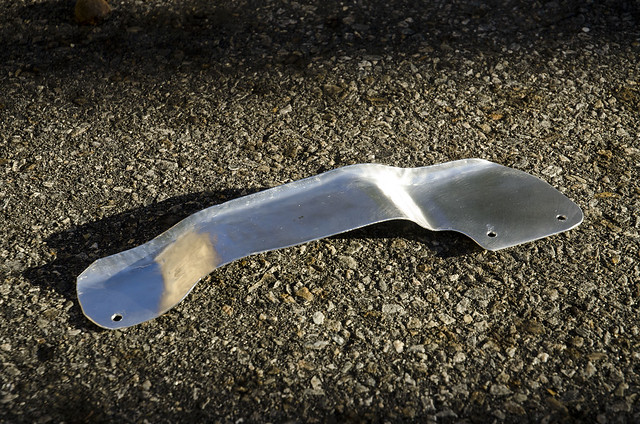 This goes under the steering column. The Miata’s steering column is really fat, and it leaves a big hole in the dash. This will help keep things from getting floppy.

Once that was done, I started trimming the panel I had made. The result looks like this: 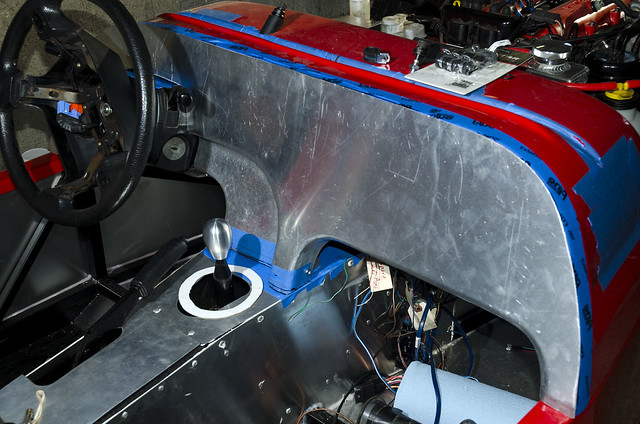 There’s still a bit of fine tuning to do, but I’ll tackle that once I have the gauges installed. You can see the curves that I was forming here. Without them, the shifter would have hit the dash when it was forward. Here’s a closeup which shows the shape, as well as the way that bracket holds the center of the dash. 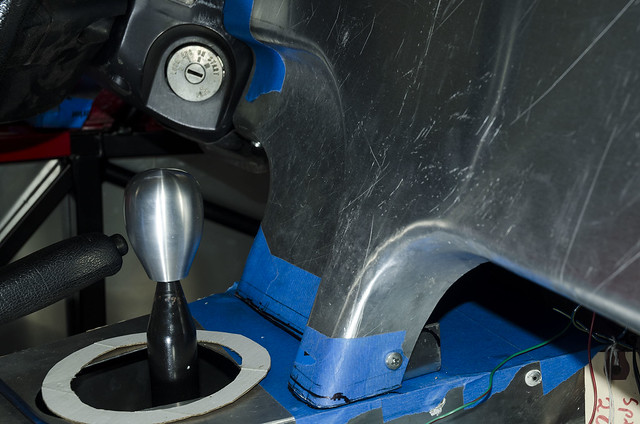 It all feels nice and solid, and I think it looks pretty good.