Last night we went to see Sleep No More by the American Repertory Theatre and Punchdrunk with Tom and a couple of his friends. Tom’s friend Ben had gone to see it on Thursday (opening night) with his family, but his sister got freaked out and they had to leave early. So on Friday, Ben was telling his friends at school about his experience, and trying to get some friends together to go again so he could figure out what it all meant. As we have an ART subscription and already had tickets to the show, we agreed to take Ben, Tom, and Matt, a friend of theirs along with us.

Arriving at the address on the tickets, the first challenge was to find the entrance. Having Ben with us, we thought this would be easy, but it didn’t turn out that way. However with the help of a friendly stranger, we found the entrance. At the end of a dark passage we found ourselves in a bar called Manderley. The bar was populated by characters from the 20’s, one of whom handed each of us a playing card. We each had an eight of hearts. I thought this would be a good thing as I believed it would allow us to stay together. Our group was called and we were each given a white mask to wear and led into an elevator. When the elevator reached the top floor, Mike was summarily ejected on his own, while the rest of us were taken to a different floor. So much for staying together. 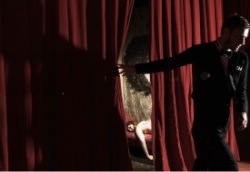 Sleep No More is based on the Scottish play* with a dash of Hitchcock. Instead of being performed on a stage, the scenes are scattered through the rooms of an abandoned school. Imagine, four floors of classrooms transformed into incredibly detailed sets. You are free to wander from room to room exploring at your own pace, interacting and trying to make sense of it all. Books left open to a particular page, letters half written, the remains of a meal…. Everything has been artfully arranged with great attention to detail.

I left the boys to explore on their own while I went looking for Mike.

Tom: We set off blindly, trying all the doors, even the ones with big padlocks on them (yes Ben tried them), looking for interesting places to explore. We noticed that an actress was on a door that was getting carried down the hallway by an actor, who periodically stopped to allow the actress to move around. We had no idea what was going on. So we explored some more, finding a room with a crib in the middle surrounded by paper maché headless babies floating in the air. It was kind of weird because we were all alone in the room, and we wondered, ‘What’s this about?’

We were in a hallway when this dude comes running down the stairs and nearly knocks Matt over. Another guy in a pink shirt with a jacket comes running along and nearly knocks the first guy over. The first guy pushing him away runs off down the hall, the pink shirt guy follows him. So we follow them, and we come into a room that has cardboard walls. In the room three guys are playing cards. Other spectators are in the room and it’s all very quiet. The game was completely unintelligible. Eventually one of the players picks up a card and a hammer and nails the card into the wall. They continue playing, and are about to nail a card into the table when a dude with blood all over his chest arrives. Later we figure out this is Macbeth. He starts beating up the guy in the pink shirt for no apparent reason and throws him over a counter. We later notice that the card, which Matt picks up, is the suicide King, King of Hearts.

That was basically the tone for everything that happened. Completely surprising, unexplained and confusing. Ben had wanted to return to get some answers, but seemed to end up just as confused after his second visit. It was still a lot of fun wandering around finding weird stuff like a room that was completely dark except for a telephone that when you picked it up gave a busy tone. It doesn’t seem as though this will be useful in understanding Macbeth when I eventually have to read it for school, but it was a lot of fun.

Chris: I wandered alone for a time, distracted from my search by walking into the middle of a scene involving a woman walking along the tops of the school lockers while a man held a door as a bridge. After this and other confusing experiences, I encountered Mike standing in a room filled with bathtubs. One was filled with bloody water while another contained an eel swimming around. Wandering into another room we encountered the King getting ready for bed. While he was sleeping, Macbeth stole into the room and murdered him before our very eyes. The alarm was raised and people started running up an down the halls.

We continued to explore and watch. After hours of wandering in and out of half familiar scenes we found ourselves back at Manderley where the boys were sitting at a table listening to the band playing old show tunes.