It’s basically about how he has changed his mind on the environmental effects of:

I’ll talk about the first in a future post (because I want to read Shadow Cities first), but I found his thoughts on nuclear power and genetic modification particularly interesting.

Brand obviously knows a lot of people in the environmental movement, and he seems to have a very clear understanding of why so many of them are against these two things.

Brand sees the environmental movement as composed of three types of actors, which he calls:

When he describes the romantics, he uses terms like purity and contamination. Many people feel that any radiation is bad, even though we’re constantly bombarded by a fairly substantial background radiation. In the same way, they’re concerned about foreign genes contaminating a species, even though we’ve been performing all sorts of genetic modifications for millennia, and current research shows that genes are constantly being swapped between species.

He doesn’t mention Jonathan Haidt, but these descriptions sound exactly like one of Haidt’s five intuitive ethics. Haidt argues that people have unconscious disgust for things which violate one of these intuitive ethics, and that their rational mind then makes up a reason why it’s bad.

Specifically, this sounds like the Haidt’s purity/sanctity ethic. In general, this is associated with conservatives: 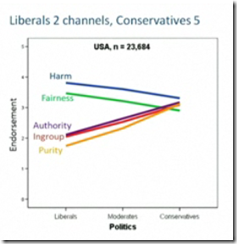 but Haidt does mention that you also see it in liberals with respect to food. This is very closely related to what Brand is talking about.

Haidt has some thoughts on how to use his theories to change people’s minds, and as he said in his Ted talk:

A lot of the problems we have to solve are problems that require us to change other people.

Haidt has suggested starting out with conversations about unrelated problems in which you and the other person both see the problem in terms of the same intuitive ethic. Once you’ve done that, you’ve primed the pump for them to see a different problem through that same lens, and can use it to make progress on a subject which they see through one of the other lenses.

Brand seems to have come to a similar conclusion. He talks about malnutrition in the developing world. That’s activating the intuitive ethic that Haidt calls Harm/Care. Then Brand is talking about GM projects like Golden Rice, and how they can help. That’s move the Harm/Care ethic into a domain that people were used to viewing through the lens of the purity/sanctity ethic.

One funny thing that Brand talks about in his book is iGem. Have you heard of that? It’s a project which grew out of one of MIT’s IAP courses. It is:

That’s right, a group of undergrads (180 teams this year) compete to make new life forms with interesting characteristics. They’ve come up with things like bacteria which add flavor & color while they make yoghurt, microbes which change color to mimic Mexican soccer fans performing the wave, and my favorite: E. coli which smells like wintergreen, but changes to a banana scent when it’s ready for processing.

Anyways, that was pretty rambling, but like all of Stewart Brand’s books, this one is bubbling with great ideas. You should check it out. One nice thing he’s done with this book is put all of the footnotes and sources online.