We’ve been playing around with a site called Goodreads lately. It’s a site for tracking all of the books you’ve read. Kind of like LibraryThing, but we’ve found it a bit more engaging.

It has a nice recommendation engine which gives you a list of books you might enjoy based on the ones you’ve listed. That part was already a winner for me because it led me to a classic I’d missed. I love all of those humorous British travel writers like Wilfred Thesiger but I had never read A Short Walk in the Hindu Kush. I just finished it, and it was hilarious. I can’t believe I’ve missed it all these years.

Most things at Goodreads seem to work pretty well, but we did notice one oddity. Their “genres” are based on crowdsourced tags. Mostly this works pretty well, but look at the suggestions it came up with for the genre “Science” for Chris: 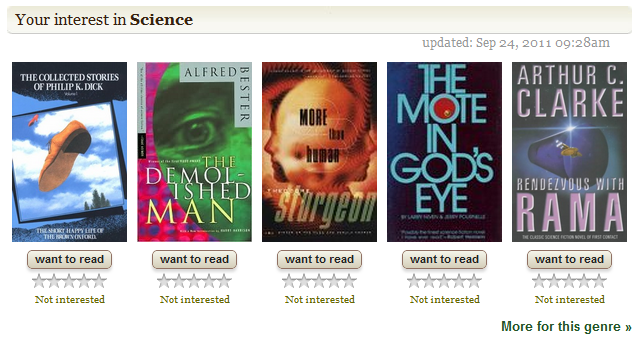 and here’s what it suggested in the same genre for me: 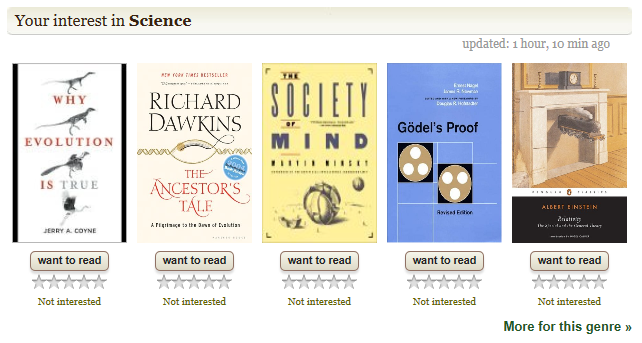 I don’t think that those are actually the same genre, do you? I think that’s a general problem with crowdsourcing. Different people have different ideas about what particular words mean. Sometimes when you throw them all in a pot and stir, they don’t actually blend. You end up with a “set” which is actually a bimodal distribution.

But for the most part we’ve been enjoying Goodreads. I particularly like the Android app. It means that I can carry my “To Read” list with me when I go to the library, and it also has a barcode scanner which makes it really easy to enter books.