Many, many years ago, I worked on a data acquisition unit for a Formula 1 racing car. It was a very clever contraption. When it worked, it could collect eight channels of data while the car was on the track. When it got back to the pit, we’d plug in this Kaypro computer we lugged to the track. Then we could offload the data and plot it. Unfortunately, it often didn’t work. It was all handcrafted in the shop and was definitely pushing the state of the art at the time. The only other team doing something similar was the Renault team. They had this thing that was housed in one of those aluminum brief cases. They bungee corded it onto the car’s rollbar when it went out on the track.

Fast forward to the present and Formula 1 teams are collecting hundreds of channels of data and transmitting them back to the pits (encrypted of course) during the race. But even cooler, the same sort of technology is starting to be available to us civilians. Check out what I’ve been playing with lately. 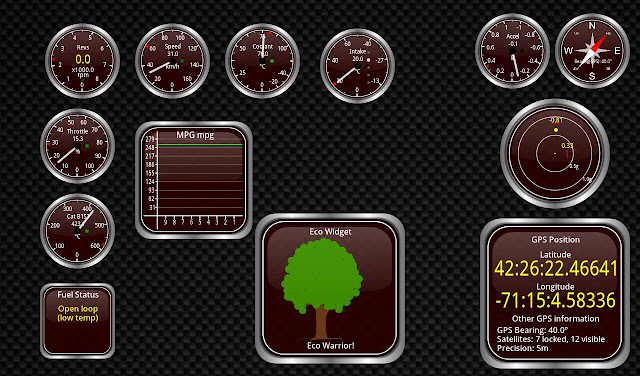 This is an Android app called Torque by Ian Hawkins. You install it on your phone or tablet. Then you plug a Bluetooth OBD 2 scanner (I’m using this one) into your car. The Android device talks to the scanner over Bluetooth and the app can display all of the data your engine’s control system is collecting.

That picture above was taken while we were toodling around town in Chris’ Prius. You can track all sorts of details about what the engine’s doing. Things like the throttle position and the temperature of the catalytic convertor. It can also collect things like your current position and direction (using the Android device’s GPS) and your acceleration. You can also produce graphs of all of this stuff, and plot one variable against another. We would have killed for something like this back in the day.

In addition to that, it supports plugins which can do things like collect video with map and data overlays. Handy for your next track day. And he has a wiki with details on how to write your own plugins.

Definitely my favorite Android app at the moment. Way cooler than Angry Birds.