We went down to the Esplanade for the Fourth this year. It was a beautiful day, but it felt a lot worse than it looks in this picture. It was quite hot and muggy. They’d set up misting tents and everyone was drinking a lot of water (and pouring it over their heads). I remember the last year Arthur Fiedler conducted the concert (1979 maybe?). That was a miserable rainy night. We were all wearing garbage bags with holes cut in them, and the potato salad was floating around in all of the water that had gotten into the bowl. So I didn’t really mind the heat this year, and I’m sure that Arthur wouldn’t have either. Big clouds were boiling up all afternoon … … but as the sun went down it cooled off and got quite nice. Once it got a bit darker, the Pops and the Navy Sea Chanters started playing the Star Spangled Banner, and there was the traditional flyover by a couple of fighter jets. But as the Pops played, big lightning bolts started flashing across the sky on the Cambridge side. After a while, they decided that it was too dangerous to have everyone on the Esplanade and they told everybody to evacuate! The next bit was like a scene from a zombie apocalypse movie as hundreds of thousands of people streamed across the bridges and into the tunnels. After about half an hour, they called the all clear. Everyone went back to their places and the orchestra started playing again. This year, MIT had a neat hack running in the Green building. They had colored LEDs in all of the windows which were doing a real-time animation in time to the music. 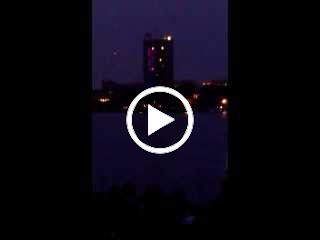 The cannons had been pretty busy all afternoon as they fired off salutes to local dignitaries. We were really looking forward to hearing (feeling) them during the 1812 Overture especially as it was the 200th anniversary, and they were making a big deal of it. Unfortunately, because of the evacuation, the music was cut short and the 1812 overture was skipped. The boys suggested a few things that they could have skipped instead, but they’re not in charge of programming. At the end of the Stars and Stripes Forever, at the point where they drop the flag, the Green building suddenly turned into a giant flag … … and the fireworks started, and the rain too! It came down in buckets as the rockets started taking off. Everyone hid under the nearest tree. After the first couple of rounds, the rain settled down to a light drizzle and we all ran back out to get a better view. Once the fireworks were done, everyone headed home. Lots of roads and bridges are closed to cars at this point, so people figured out all sorts of ingenious ways to get around. We finally got home some time after midnight and crawled into bed. It was a very fun day!