Now that the election is over, all of the chatter in Washington is about the fiscal cliff (well, not all the chatter). I’m surprised by how narrow the discussion is when it comes to raising additional revenue. There is some back and forth about rates versus exemptions, but they’re mostly just talking about income taxes. That’s not the government’s only source of income. 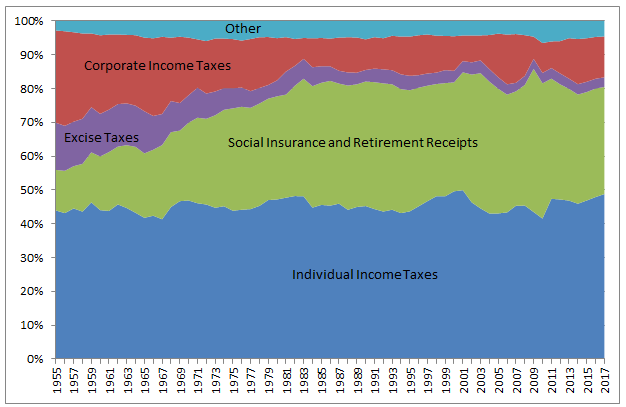 As you can see, the percentage of the total which comes from Individual Income Taxes has been pretty steady over time, but it’s been a bit under one half of the total. That means that it’s the most important source of revenue (it’s also somewhat progressive), but it seems to be the only one we ever discuss.

The second biggest category is Social Insurance and Retirement Receipts. And that one has grown quite a bit over the years. That makes sense because that’s a decent percentage of our expenses, and it’s the area where the expenses have been growing the most. One problem with that revenue source is that the current implementation is much more regressive than the Individual Income Taxes revenue. There has been a bit of discussion about raising the cutoff where you stop paying these taxes (the Taxable Earnings Base).

But what about the Corporate Income Taxes section? That’s currently less than 8% of the total. Back when I was born, that accounted for more than 20% of Federal revenues. Do you really think that corporations are getting a third of the benefits that they used to get from the government, or do you just think that they’ve hired better lobbyists?

Also notice the change in Excise Taxes. That’s things like the tax you pay on alcohol or gasoline. In the 50’s, that accounted for about one eighth of the total federal revenue. Now it’s pretty insignificant. We all hate paying more at the gas station or liquor store, but perhaps there are things we could do to raise revenues in that area.