Here’s the car we’ve been driving in the UK. 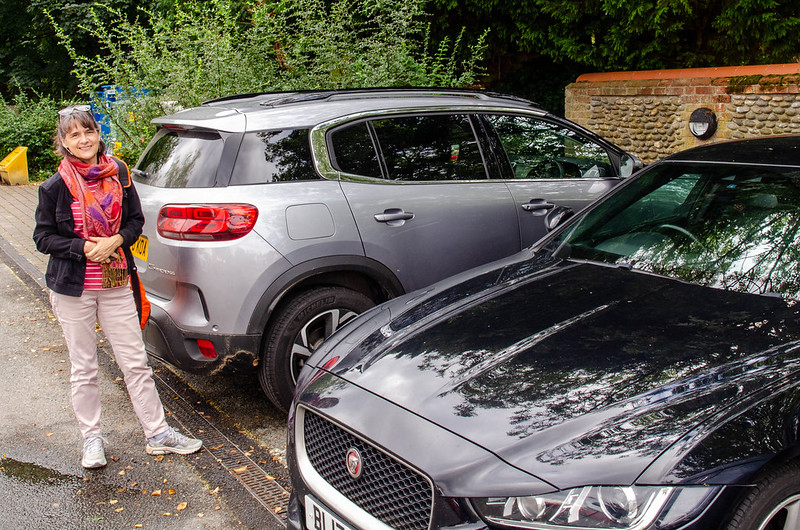 No, not the Jaguar. The one behind her. We call it the “French Whale”.

The same thing happens every time we come to the UK. We stumble off the overnight flight at dawn and make our way thru the lines at immigration and then take the bus to the rentacar place with our caffeine levels poorly adjusted. Once we get there and open our mouths, they recognize the American accent and decide that this is a chance to get rid of the giant van/suv/sedan at the back of the lot that nobody else wants. Then they tell us we’re lucky because “We’re upgrading you!”. And before we know it we’re off to navigate narrow village lanes in a car that’s bigger than our house.

Being French & modern, this Citroën brings some extras to the game. Its handling feels about the same as your grandfather’s favorite armchair. The shifter doesn’t feel like it’s connected to anything at all, and I’m most guessing which of the dozens of gears I’ve gotten it into. It has a display out of some sort of spacecraft, but all of the data in the display is the car’s opinion about what it thinks I should be doing, rather than actual information about what’s happening. So there’s a display for the shifter, but it tells you what gear it thinks you ought to be in, rather than what gear you’re actually in. That was kind of confusing for the first day or so.

On the way to Orford yesterday, in the pouring rain, it suddenly told us to take a right turn down the narrowest lane you’ve ever seen with lots of stone walls. That didn’t seem to have anything to do with getting us to where we were trying to get to. I think it was just the car’s AI having a bit of a chuckle.

Anyways, I’m starting to get the hang of it and in a week or so we should be getting along.