Tomatoes are something that I’m pretty picky about. One of the nice things about having Wilson Farms just down the hill is that I can be sure of getting good tasting tomatoes even in the dead of winter. In the late summer I can usually rely on having some great tomatoes growing in the garden. Except this year. I’m not getting any tomatoes to speak of on my plants. There have been a handful of cherry tomatoes off the 6 sweet-100’s plants that I planted – nowhere near hundreds. The other varieties (Brandywine & Purple Cherokees) have a single green tomato on each plant – pretty pitiful if you ask me.

Well, I’m not alone. It has been a terrible year for tomatoes all around. Apparently the cool and rainy conditions earlier in the year resulted in a tomato blight that has hit a lot of the northeast. It should be the height of tomato season. I even heard on the radio that some folks have resorted to making BLP sandwiches (with plums) instead of BLTs.

Still it is tomato season. And even if I don’t have much coming from the garden, I can still rely on Wilsons and the local Farmers markets like the ones in Lexington (having their annual Tomato Fest this week) and Belmont for a selection of Heirloom tomatoes for making tomato salads. A couple of weeks ago the Globe Magazine had several tomato recipes in honor of La Tomatina in the Spanish town of Buñol. It’s a tomato festival where they end with a huge food fight – throwing tomatoes of course. I think I’d rather eat them.

None the less, the salad with roasted peppers particularly caught my eye, and I’ve made something like it a couple of times since then as a change from the usual tomatoes with basil and fresh mozzarella. Here’s my take on the roasted pepper and tomato salad. 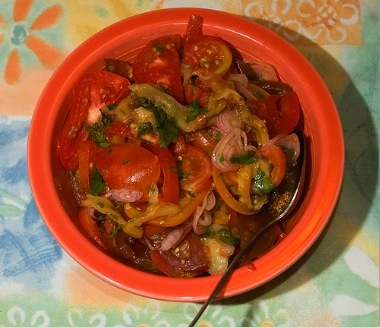 Roasted Pepper and Tomato Salad
3-4 roasted peppers (mix of colors is nice)**
1-2 cloves garlic, minced
1 tsp half-sharp paprika (or mixture of sweet paprika and cayenne adjust to your taste)
3-4 sprigs of fresh thyme, chopped
1-2 Tbsp white wine vinegar
1/4 cup olive oil
1.5 – 2 lbs tomatoes, sliced (a mix of colors is nice, but mostly go for varieties with flavor! I like to mix some yellow brandywines or one of the darker varieties with the normal reds)
1/4 cup chopped fresh parsley
1 large shallot very thinly sliced (a mandoline is good for this)
salt & pepper

Mix the garlic, paprika, thyme and vinegar together in a bowl along with a 1/2 tsp of salt and some pepper. Slowly whisk in the olive oil until well blended. Cut the roasted peppers into strips and toss in the bowl with the dressing along with the chopped parsley.

Put about a third of your sliced tomatoes into a serving bowl. Spread half the sliced shallot over the tomatoes and sprinkle with a little salt and pepper. Then top with a quarter of the sliced peppers and dressing. Repeat the layers. Finally add another layer of tomatoes and top with the rest of the peppers, salt and pepper. You can also sprinkle a little extra parsley on top for looks if you want.

** Roasted Peppers
Of course the best thing is to roast your own peppers, but that’s not always practical. Next best would be fresh roasted by someone else – we’re lucky that Wilson’s sells roasted peppers that are quite good when you need something quickly. Finally, you could use the ones in the jar, but I would rinse them a couple of times so the flavor from the marinade in the jar doesn’t overwhelm the flavor of the dressing. To make your own:
Roast the peppers under the broiler or on the BBQ grill until the skin is mostly blackened. Turn the peppers to roast all sides. Once all the sides are blackened, put the peppers into a ziploc bag and seal, or a bowl and cover with plastic wrap. After 5-10 minutes take the peppers out and the skin will mostly peel off easily. Since these are sweet peppers I don’t worry about the bits that are left. Pull out the stem and seeds and slice as needed for the recipe.