In honor of the wonderful new Ken Burns series that starts tonight, we thought we’d do a series of posts about our memories of some of our favorite parks. We’re not going to be able to cover all of the parks we’ve visited. We figured out the other day that if you count national monuments and historic sites, we’ve visited well over 50 of them.

Yellowstone was the first large park we took the kids to back in 2002. There’s lots of great things to see and do without too much serious hiking, so it’s a good park for small kids. The thing that impressed them the most were the animals. They memorized all of the rangers’ rules about how far to stay away from the different kinds of animals. One morning they opened the door of our cabin and there were two bison grazing right outside. They slammed the door and asked “What do we do? They’re not 25 yards away!”. 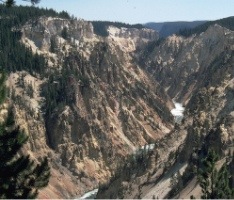 While it may not be as big as the Grand Canyon in Arizona; it’s actually more beautiful. Especially the two big waterfalls.

We did go on one big hike with the kids. We climbed to the top of Mt Washburn. It’s a beautiful, cone shaped mountain whose peak is at more than 10,000 feet. It’s a nice, easy trail, but when you get near the top, you come to this part. It’s only about the width of a single lane, and there’s a big drop off on each side of the trail. If you look down on either side, you can see mountain goats hundreds of feet below you. I didn’t like this part much, but I made it across by just looking straight ahead and not to the sides. As you can see, the boys were pretty excited about climbing such a big mountain. At just five years old Peter was probably one of the youngest to climb the mountain on his own feet. That’s the canyon behind them. There was also a forest fire in the background. That’s why it looks so smoky. We got to talk to some of the rangers who were fighting the fires. On our way down the mountain some black thunderclouds moved in. We kept the kids moving at a good pace, even as they started to get tired, by singing The ants go marching …, and feeding them cookies according to Tom. Of course we were making up the words by about nine as we didn’t remember them. Of course, Yellowstone is most famous for its geysers and hot pools. If you go to Old Faithful, you’ll want to go very early or late in the day to get good seats like these and to avoid the crowds. We stayed in cabins at the Old Faithful Lodge near Old Faithful. It’s a really nice area until the tour buses show up. The crowds don’t show up till about 10 AM because it’s quite a ways from any of the entrances to the park. At quieter times we often saw wildlife wandering around the areas which were going to be most crowded during the day. On our way back to the cabin after dinner at the Old Faithful Inn we shared the board walk next to Old Faithful with a coyote. The coyote didn’t seem phased one bit to be walking beside us.

Once the tour buses showed up, we’d head off to see some of the other geysers. The trails in the geyser basins tend to be very level hikes and the kids generally enjoyed them a lot. In a lot of ways the less famous geysers are the most interesting. At Old Faithful they keep everyone way back. At some of the less famous ones, the water rains down on your head when they go.