The Mathematics of Tomato Cages

Chris recently bought some new cages for supporting the tomatoes. They’re a bit fancier than our old ones. They look like this: There are three poles which you stick into the dirt. Then you connect the poles with links. There are a total of nine links. The idea is that you add these in three groups of three. This means that in each group, you have one link connecting each pair of poles.

I started tidying them all up so they were more even, and I realized that the mathematics behind the different ways of setting up the links is actually kind of interesting. Here’s a diagram of all eight of them. 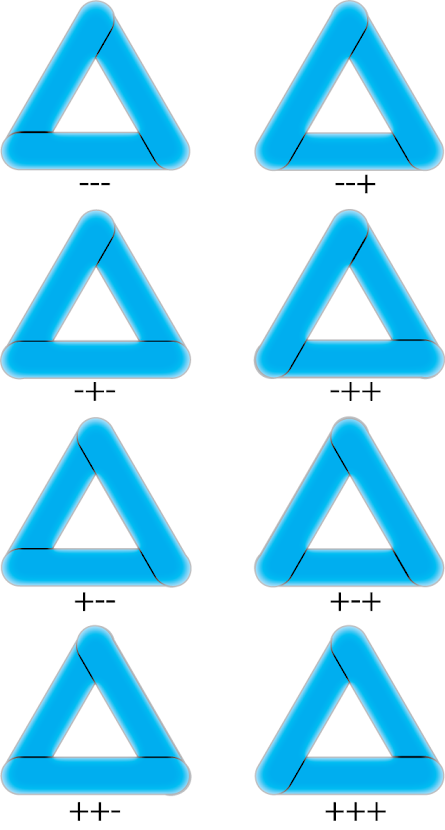 You can see the 3● symmetric ones in the upper left and lower right corners. You can see that all of the others have one link which is on top and one which is on the bottom. But you can group these into two sets of three. You can transform between the members of one of these sets using rotations. For example, we can transform the ++- diagram into the +-+ diagram by rotating 120 degrees counterclockwise. But we can’t transform a member of one set of three into a member of the other set by rotating. We need a reflection to do that.

By stacking three of these, you get some interesting combinations. If all three are one of the two rotationally symmetric arrangements, then the entire tomato cage has that symmetry. In other words, every (+++,—,+++) cage looks like every other (+++,—,+++) cage. But once you start mixing in some of the other cases, you can start to generate quite a number of different combinations.