Listening to the news from the RNC convention this week, I’ve been suffering from a bit of cognitive dissonance. A number of the economic “facts” they’ve been quoting don’t seem to jibe with what I thought had been happening over the last couple of years. Luckily, we can check the numbers using the handy collection of datasets which are published by the St Louis Federal Reserve. They even have some nice online plotting tools which can create charts like this: 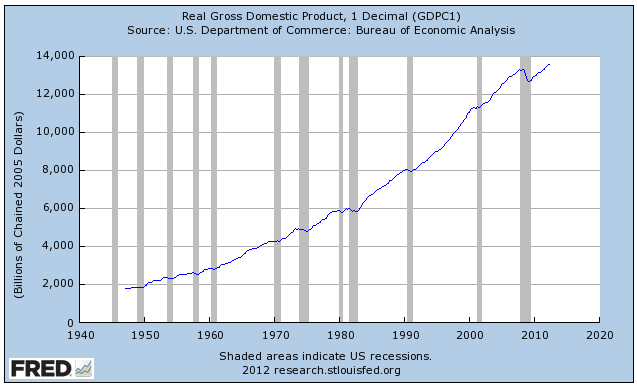 That doesn’t seem like the best way to look at the data in the context of a presidential election though, does it? What if we took the timeseries data and folded it so it started over at the beginning of each president’s term? To get things to line up, we’d have to normalize the data for each plot to the value at the beginning. If we do that, we get a plot which looks something like this: 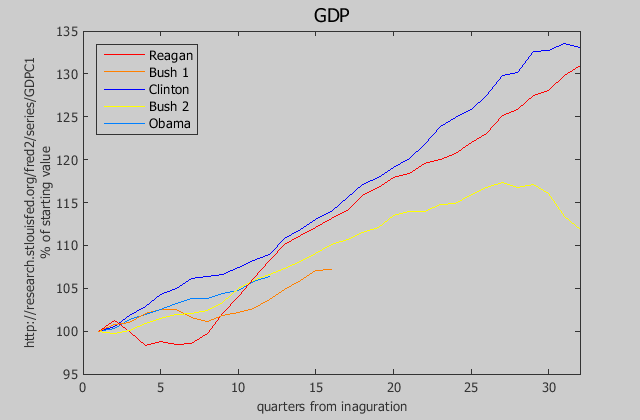 That makes it a little easier to compare how each administration is doing, doesn’t it?

OK, lets use this to look at some of the economic numbers we’ve been hearing about this week. Let’s start by looking at the size of government. We heard several times this week that the current administration has been expanding government and making it more intrusive. That should show up in the series named USGOVT. If we plot that, it looks something like this: This chart is showing how the number of government employees changes over time. The blips I marked with green circles are the temporary hiring which happens every 10 years for the census. That chart doesn’t seem to match what we were hearing from the convention, does it? The size of government has actually been dropping pretty quickly since Obama’s inauguration. In fact, the only recent president who cut the size of government faster was Reagan, and by this point in his administration it was actually creeping back up.

That’s interesting, but what about private sector employment? Fred has a nice dataset for that which is called USPRIV. If we plot that the same way, it looks like this: 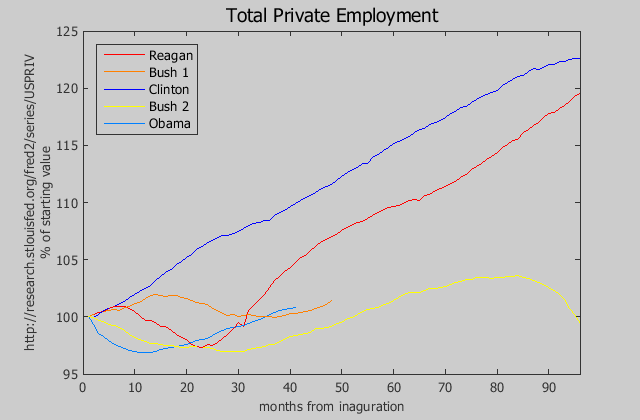 You can see that the first 10 months of the current administration look pretty bad, but what’s going on at the 18 month mark? It’s starting to pull ahead of the performance of the previous administration.

We can also look at the unemployment rate. Fred calls that UNRATE, and it looks like this: 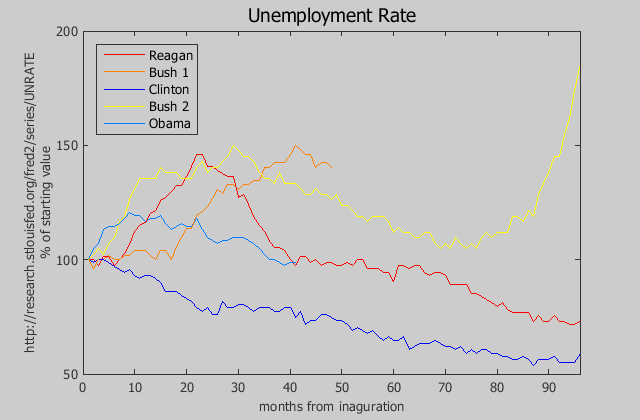 Again, the first 10 months look pretty grim. But at this point it’s looking better than for either of the Bush presidencies. Hmmm.

Well maybe the problem is somewhere else. We’ve been hearing a lot about US manufacturing. Maybe that’s the problem. Well Fred has this nice dataset called INDPRO which measures how well US manufacturers (like the auto industry) are performing. If we plot that, it looks like this: 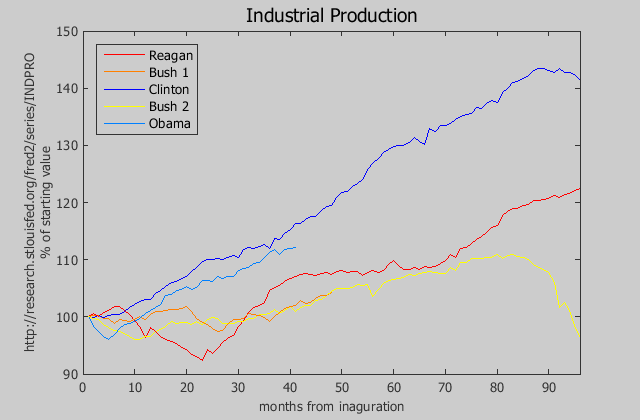 What I get from that chart is that if you care about US manufacturing, then you should put a Democrat in the White House.

There are loads of other great datasets at the St Louis Fed. Try going through them and see what you can learn about how the US economy is doing.